The kneejerk reaction to reality television is that it is exploitative and low culture. Most people feel at ease saying that watching a reality program made them dumber. But, this easy response makes a lot of people overlook the good that can be found among the bad. This is made extremely clear in reality television programming that focuses on addiction.

Traditionally, television has presented addiction in black and white terms. As the National Institute on Drug Abuse notes: “Many people do not understand why or how other people become addicted to drugs. It is often mistakenly assumed that drug abusers lack moral principles or willpower and that they could stop using drugs simply by choosing to change their behavior. In reality, drug addiction is a complex disease, and quitting takes more than good intentions or a strong will.” The complexity has been done a disservice by simplistic programming that ignores the shades of gray.

On old-fashioned television entertainment, addicts are gutter-dwelling losers, dealers are terrible villains, and using a drug even once will make you either an addict or dead. But, you know differently and so does your family. Your addiction is complicated. But, how can you explain that if television is spreading lies? In some ways, reality television changed that. 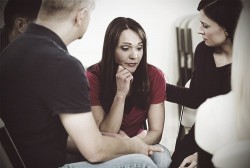 Reality TV shows such as Intervention give audiences an idea of how families can help an addict.

2005 marked a year of change in the way addiction was marketed for television because of a show called Intervention. In 2005, television station A&E released a few episodes of the show and the audience loved it. The station ordered a full season and began blazing a trail for this kind of programming. It went so well that the show earned an Emmy for Outstanding Reality Program at the Emmys.

The basic format of every episode of Intervention is the same. An addict is followed and their addiction is filmed, along with its effect on friends, family, and the substance abuser. Toward the end of the episode, a trained interventionist guides all the concerned people through an intervention. A qualified therapist arranges for those who accept the intervention to go to treatment. The show also recommends that the family, as a whole, seek out therapy to heal old wounds.

Intervention has its drawbacks, but it also does some excellent things.

It provides its viewers with a vocabulary for talking about addiction. Because they finally have a shared language for their experience, people close to addicts can begin to share their story and escape isolation.

In addition, viewers who are addicts can watch the show and understand how addiction affects bystanders. This is easier with objective viewing than if approached by someone close to them. There is less urge to be defensive.

Programs like Intervention also show addiction’s complexities, which can help change the black and white thinking that surrounds it. “Many Americans today do not yet understand why people become addicted to drugs or how remarkable scientific advances are literally redefining the arena of addiction, notes Nora D. Volkow, M.D., Director of the National Institute on Drug Abuse (NIDA).” But, these programs educate and inform.

Unfortunately, Intervention’s success inspired a ton of copycat shows, hoping to capitalize. In order to snag viewers, these shows began to compete. That competition lead to dependence on shock value. The stories became more dramatic and the editing played up conflict.

Viewers who accept all reality television as fact or feel that Intervention and shows like it speak to their experience exactly should remember:

If you are ready to seek help for your stimulant addiction and you want to find something that fits your needs and your budget, contact the experts at Stimulants.com at 800-605-6597 Who Answers?. Get the real story.

Drug Intervention Considerations for a Loved One Living with Crack Addiction