Should you Go to Rehab for your Caffeine Weight Loss Addiction?

According to the National Institute on Drug Abuse, stimulants are an addictive drug that increases the body’s processes. This includes metabolism. When you speed up your metabolism you lose weight. This is why stimulants are used in many of the diet pills offered to those who want to lose weight in both healthy and unhealthy ways. Although some people do not believe that caffeine diet pills are harmful or addictive they can be very dangerous in certain circumstances.

Stimulant addiction is very common in today’s society. It is also one of the more recognizable addictions by appearance. Most of the people who are amphetamine and some of those who are addicted to nonamphetamine diet pills such as those containing large amounts of caffeine are indeed very thing. Not only are they extremely thin but they have a gaunt skeletal appearance. Most of the people who are chronic stimulant users dehydrate their body to the point where they assume an extremely unhealthy look. 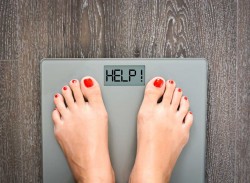 Caffeine pill abuse is often a warning sign of an eating disorder.

These are mostly caused by dehydration and lack of good nutrition. They are usually hallmarks of stimulant overuse and over dieting for the purposes of weight loss. Another thing that they are indicative of is an eating disorder.

Constant dieting particularly using caffeine will not make you lose weight and will only make you look and feel unhealthy. This constant dieting is also an good indication of an eating disorder. With eating disorders so prevalent in our society, it is not a surprise that many use caffeine, an addictive substance itself, to further their weight loss and unfortunately the disorder as well.

There are quite a few different eating disorders that caffeine overuse can indicate. Some of them are: