Caffeine and Nicotine are legal stimulants that are consumed universally and both cause physiological changes in the brain, increasing dopamine and leading to tolerance, dependency, addiction, and withdrawals. Having the right amount of dopamine is associated with pleasure, attention, and movement. It’s what makes us feel well, motivates us, helps to fine tune other systems in the body, and acts as a “reward circuit” that influences our behaviors to want more. 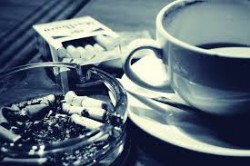 Nicotine and caffeine are legal stimulants, but they can be addicting as well.

Nicotine addiction causes the same physiological changes as many other drugs including compulsory behaviors to consume more, cravings, tolerance, and withdrawals. Many individuals begin smoking early in adolescence although it is illegal in the United States to do so before the age of 18. According to the National Institute on Drug Abuse, cigarette smoking by youths has continuously declined since 1997, but other tobacco products are a concern. E-cigs, small cigars, and smoking tobacco through hookah pipes is a concerning trend for this age group.

Nicotine stimulates the central nervous system increasing heart rate, blood flow, and alertness, but, over time, the arteries begin to narrow from the carcinogens inhaled from the smoke. Psychologically, nicotine may produce a calming effect as it increases dopamine in the brain and produces a sense of pleasure, leading to nicotine addiction.

Decreased oxygen in the blood can have serious effects on all other systems and organs of the body and the carbon monoxide and other toxins poison numerous cells as it flows through the blood. Nicotine addiction causes cancer, respiratory diseases, cardiovascular diseases, tumors, narrowing and hardening of the arteries, stroke, blood clots, and heart attack.

Caffeine is the most psychoactive chemical used in the world. It can be found in teas, coffee, carbonated beverages, pills, alcoholic beverages, energy drinks, and chocolate. It stimulates the central nervous system activity and the person’s metabolic rate. Caffeine increases alertness, mental awareness, energy, and improves coordination. Moderate consumption of caffeine is considered healthy and productive, but, excessive consumptions can cause both physical and psychological health risks.

Although they are not life threatening, caffeine withdrawals can be unpleasant and may include cravings, depression, headaches, nausea, anxiety, mood swings, fatigue, decreased cognition and motor functioning. These symptoms will dissipate gradually and do not normally require mental health supervision.