Harmful Side Effects of Stimulants

Stimulants are drugs that speed up activities in the brain and central nervous system (CNS). According to the SAMHSA, “On a short-term basis, stimulants exert their effects by disrupting or modifying the normal communication that occurs among brain neurons and brain circuits.”

Increases in the electrical and chemical brain processes have cascading results throughout the body increasing heart rate, blood pressure, temperature, and motor functions while changing moods and perceptions and producing euphoria. The harmful side effects of stimulants are extensive and even first time users are at risk.

For medical purposes, amphetamines are stimulant drugs used to treat attention deficit disorders (ADD/ADHD), obesity, and narcolepsy, but, cocaine and methamphetamine are the illicit stimulants that continue to prevail across the large majority of abuser populations. 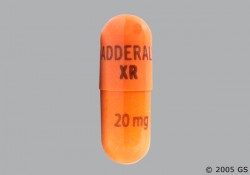 Amphetamines like Adderall are often used to treat ADHD.

Millions of amphetamines and amphetamine derivatives are prescribed in the United States annually, mostly for the treatment of ADD/ADHD conditions in both children and adults. These drugs are often abused for their stimulant properties and as cognitive or performance enhancers. Adderall and Concerta, available in immediate release and extended release forms, are some of the most commonly preferred and diverted brands of these types of drugs to the street.

Amphetamines have differing mechanisms of action including increasing dopamine or changing the functions of the neurotransmitter, norepinephrine These naturally occurring chemicals in the brain help to regulate nerve cell communications to keep us well. Amphetamine users may experience acute agitation, psychosis, tachycardia, and hypertension if abused in ways other than intended or by others for whom they were not intended.

Cocaine has a long history of use for both medicinal and recreational purposes with primary sources to the United States originating in South America. According to the SAMHSA, “Cocaine has two main pharmacological actions. It is both a local anesthetic and a central nervous system (CNS) stimulant–the only drug known to possess both of these properties.” It comes in a variety of forms including coca paste, powder, liquid, and free base forms such as crack.

Cocaine’s psychoactive stimulant properties produce an intense and powerful high when the drug is consumed, usually, via non-oral routes of administration such as snorting, smoking, or injecting. According to the NIDA, “Other than medical uses, there is no safe way to use cocaine.” The impurity of drug and the unknown chemical variants used in the processing methods and added throughout the distribution chains may prove to be lethal in the first and smallest of doses.

Methamphetamine (“Crystal, Ice, Meth, etc”) happens to be one of the most dangerous stimulant drugs out there. As an amphetamine derivative, methamphetamine was commonly prescribed and available in years past, but, rarely used therapeutically today. Most methamphetamine is produced in clandestine laboratories, including home labs, using poisonous precursor chemicals such as battery acid and paint thinners. The toxicity of methamphetamine has been linked to impairments in brain functioning that “may underlie the cognitive and emotional deficits seen in many MA users” according to the SAMHSA.

Similar to cocaine, methamphetamine produces a powerful high and is consumed via alternative routes of administration with an existential power to cross the blood brain barriers in the brain easily. While cocaine has a relatively short half-life and can be eliminated from the body in about an hour, methamphetamine is not so easily metabolized and can exert its effects for several hours.

Stimulants are often abused in binges with intermittent abstinence stages that lead the user to believe that they can control their stimulant use. Like other psychoactive drugs that produce pleasurable sensations and euphoria, stimulants increase dopamine, the feel good chemical in the brain that reinforces continued use. A chronic and relapsing mental health disorder, stimulant addiction has many social, medical, and psychiatric costs to the abuser and control over stimulant use quickly becomes a fleeting glimpse of days gone by.

Neurological problems are some of the most harmful side effects of stimulants including seizures, stroke, and coma. Users may experience tremors, vertigo, and muscle twitches that are uncontrollable and appear randomly over the next several days. Sleep disorders, headaches, psychosis, depression, anxiety, aggression, and other personality disorders can be harmful side effects of stimulants caused by dysfunctional neurological systems.

Stimulant abuse has a major impact on mental health. According to the National Institute on Drug Abuse, “Repeated abuse of some stimulants (sometimes within a short period) can lead to feelings of hostility or paranoia, even psychosis.” Intense anxiety, restlessness, agitation, and other stress reactions can become long term mental health issues that are difficult to treat. Frequent dysphoria, depression, insomnia, isolation, and loss of interest in once pleasurable activities can be a prelude to major depression with suicidal thoughts or tendencies.

Other harmful mental health side effects of stimulants include: