What are the Most Common Crack Withdrawal Symptoms?

Many people are unaware of the seriousness of crack cocaine addiction. This is one of the most powerful and addictive drugs in the world.

Here is what the National Drug Intelligence Center has to say about the drug:

“Crack cocaine is a highly addictive and powerful stimulant that is derived from powdered cocaine using a simple conversion process. Crack emerged as a drug of abuse in the mid-1980s. It is abused because it produces an immediate high and because it is easy and inexpensive to produce–rendering it readily available and affordable.”

The fact that crack cocaine provides an immediate high is what attracts so many people to the drug. They understand they won’t have to wait long to achieve the desired result, which is all the more reason to experiment.

Generally speaking, there is not one particular group that uses this drug more than others. According to data from the National Household Survey on Drug Abuse, more than 6.2 million Americans, age 12 or older, have used this drug at least one time during their life. The survey also added that hundreds of thousands of young adults and teens use crack cocaine. This includes approximately one million people in the 18 to 25 age group.

Symptoms of Crack Use 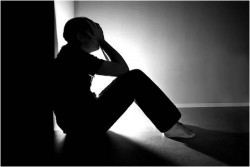 Common signs of crack withdrawal include paranoia and depression.

Since crack cocaine causes an immediate high, it is only natural that it would also bring forth a variety of symptoms without delay.

A person who is on this drug may have dilated pupils. Furthermore, there is an above average chance that he or she will be talkative and restless, unable to sit still for an extended period of time.

A person’s mood may change quickly when taking this drug, and could result in severe bouts of depression and paranoia.

Note: somebody who uses crack cocaine for an extended period of time, such as several years, will begin to show signs of premature aging.

There is one symptom of crack use that stands out above the rest: the rapid development of an addiction. With other drugs, those that are less powerful, it takes a person longer to become hooked. This is not the case with crack cocaine. It is known to cause a strong mental dependency, which can occur a few short days after first use. For this reason, even a person who only plans to take the drug once could find him or herself addicted.

Despite the fact that a crack cocaine addiction is very powerful, it is not impossible to overcome.

If a person becomes addicted, it may be challenging to put this in the past. While some are successful in overcoming an addiction on their own, others require the assistance of a professional. This is why they check into a rehabilitation center with experience in this area.

When a person is physically dependent on crack cocaine, they will develop withdrawal symptoms if the drug is no longer used. This can cause a variety of negative consequences, some of which are uncomfortable or painful.

Note: most crack cocaine withdrawal symptoms go away after a period of one to two weeks.

Some of the most common symptoms of withdrawal include:

For many, cravings are the biggest withdrawal symptom. It can be hard to put this aside during withdrawal and rehabilitation, but it is 100 percent necessary. If a person relapses during treatment, all of the work up to that point will have been for nothing.

A person who attempts to overcome an addiction without professional help could soon find themselves facing an uphill battle. By checking into a rehab center, the patient gains access to a variety of treatment options, all of which can make the withdrawal process much less painful.

The US National Library of Medicine published a study entitled “Cocaine and Psychiatric Symptoms.”

“Cocaine can produce a spectrum of psychiatric symptoms with which primary care practitioners need to be familiar. Comorbid psychiatric disorders are frequent in patients with cocaine use disorders and can worsen with cocaine use. Nonaddictive medication may be necessary to treat comorbid conditions such as anxiety and depressive disorders.”

Crack cocaine is extremely powerful, which makes overcoming an addiction very difficult. Understanding the withdrawal symptoms will allow anybody, either the person who is addicted or a loved one, better prepare for what the future holds.