As stated by the NIDA, “Crack is a form of cocaine that has been processed to make a rock crystal (also called ‘freebase cocaine’) that can be smoked.” While all forms of cocaine can become addictive and cause dangerous results when abused, this form is particularly harmful. It causes addiction much more quickly because of how rapidly its euphoric high comes and goes, and its effects can often be more potent than those of powdered cocaine due to its method of use. It is important to be able to recognize the street names for crack, as the drug’s potency can cause a user to become addicted after their first use (CESAR). 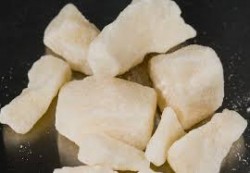 Crack cocaine is often referred to as rock or sugar block.

The most commonly used street name for the freebase version of the drug is crack. This is how one can most often tell the difference between the two types of cocaine. However, many individuals call it by other names as well. These include:

Other terms used to refer to crack include apple jacks, scrabble, jelly beans, kryptonite, raw, dice, nuggets, piles and crumbs. Many of these terms are based on the way the drug looks while others are a more regional reference.

According to CESAR, “In many areas of the country, users report combining crack cocaine with heroin, marijuana, and other types of drugs in order to create different, more intense effects.” This is an incredibly dangerous practice as the drugs, when combined, may cause effects that are even more intense than those of both druags when taken alone. Some common combinations include:

There are many other slang terms which involve the abuse of crack cocaine. For example, anyone who is referred to as a crackhead is an individual who heavily abuses this type of cocaine. A crack house or spot are places where a person can buy or sell crack. The pipe through which a person smokes the drug is called a crack pipe.

As these terms all involve the use of the word crack, it is much easier to determine when a person is using freebase cocaine and when they are snorting or injected powdered cocaine. Because this form of the drug can be so much more addictive than powdered cocaine, it is important to be aware of the distinction.