Street Names for Amphetamines You Should Know

Knowing the common street names for the different amphetamines drugs is important. Because there are so many different types of these drugs, many individuals take substances they do not know as a result. Being able to recognize the slang terms can help protect you from dangerous drug abuse and other issues. It could also allow you to help someone in need by knowing what they have taken. Be aware of the street names listed below as they are some of the most common. 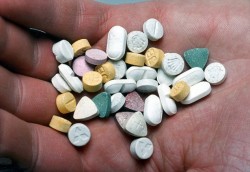 When used illegally, amphetamines are often called uppers or speed.

According to CESAR, “Medications containing amphetamines are prescribed for narcolepsy, obesity, and attention deficit/hyperactivity disorder.” However, when someone takes one of these pills without a valid prescription or abuses them just to get high, it is a very dangerous practice that can lead to severe mood swings, insomnia, tremors, and when taken in very high doses even heart attack and stroke. When sold on the street, these drugs are often referred to as:

If any of these street names are being used to describe a drug in question, it is most certainly an amphetamine of some type.

Medications that contain only dextroamphetamine have specific street names which you may hear but not initially recognize. Many of the general terms for amphetamines are clear about the stimulant effects, but dextroamphetamine which causes many of these same issues may be referred to as

Methamphetamine can be a prescription drug, but more often, it is abused in its pure form which is similar to a crystal-like rock. In many cases, if an individual uses one of the names above, they are likely referring to its the prescription pill form. However, if a person calls the drug:

it is probably this more potent version. According to the NLM, “Meth use can quickly lead to addiction.” Because illicit methamphetamine is smoked, it will reach the brain much more quickly and cause the individual to feel a stronger desire to abuse more of the drug. Understanding the difference is key to avoiding even more dangerous drug abuse.

There are some slang terms which refer to the combination of amphetamines and different drugs. These can be incredibly dangerous because of the joint effects of the two drugs. For example, goofballs are amphetamines and barbiturates that have been mixed together. According to a study from the NCBI, “The mixture produced a pattern of effects which was different from that produced by either drug separately.”

Another similar-sounding combination called speedballs contains heroin and methamphetamine, both extremely potent, addictive, and harmful drugs. It is very important to understand the difference between the two combinations as one may be much more dangerous than the other.

Knowing the different street names for amphetamines can help you stay aware of what drugs you are dealing with. You can also more readily help someone else in an overdose situation if you know what they have taken.